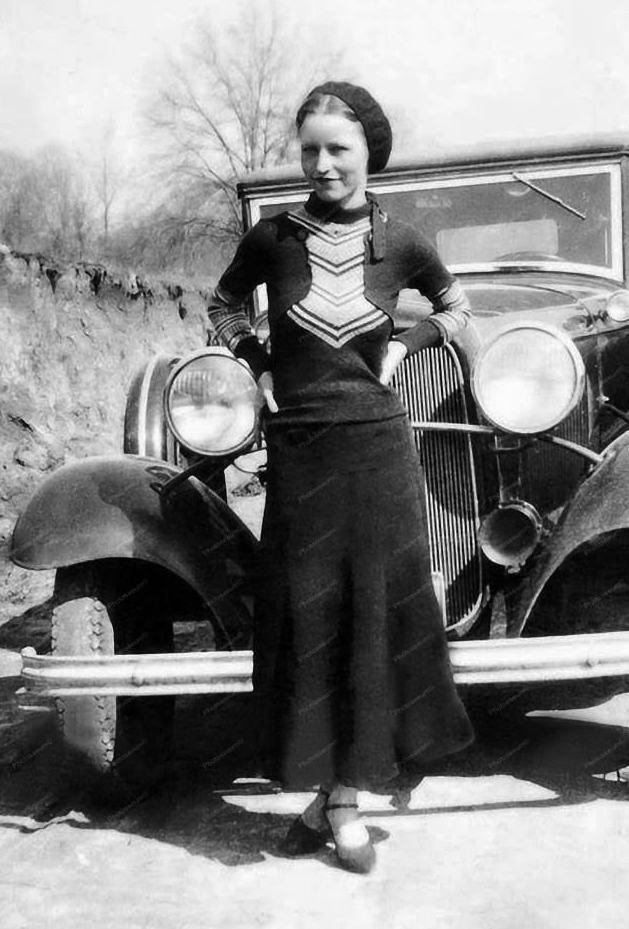 Bonnie Parker was half of the crime duo Bonnie and Clyde, whose Depression-era adventures and grisly end cemented their place in American crime history.

Raised outside of Dallas, Texas, Bonnie Parker dropped out of high school and married Roy Thornton in 1926, when she was not yet 16 years old. It was a rocky marriage. Thornton was jailed in 1929, and they never saw each other again, although they remained married.

In early 1930, Parker met Clyde Barrow through a mutual friend. Between 1932 and 1934, they went on to commit crimes from Texas and Oklahoma to Missouri and Illinois — mostly stealing cars, robbing banks and shooting anyone who got in the way. By July of 1933, they were joined by Clyde’s brother and his wife, “Buck” (real name Ivan) and Blanche, and a gunman named William Daniel Jones. The Barrow Gang’s crime spree was a national sensation, in part because of the glamorized affair between young lovers Barrow, who was single, and Parker, who was married.

Hunted by the FBI and the Texas Rangers (led by retired ranger Frank Hamer), Bonnie and Clyde were tracked to a hideout in Louisiana. They fell into an early morning ambush and law enforcement officers shot them to death in their car, many times over (the most conservative report says the two were riddled with at least 25 bullets each). Bonnie Parker was just 23 years old at her death.

Bonnie and Clyde were believed to have murdered as many as 13 people during their crime spree, complicating their status as folk heroes. Over time, most of the blame for the violence has fallen on Clyde. For her part, Bonnie Parker bragged about and defended their exploits in letters to newspapers, and her “Ballad of Bonnie and Clyde” became a quaint expression of the era’s fascination with gangsters.

Bonnie Parker was depicted by Faye Dunaway in the 1967 film Bonnie and Clyde (with Warren Beatty as Clyde Barrow)… In a 2013 mini-series, she was played by Holliday Grainger.

Something in Common with Bonnie Parker