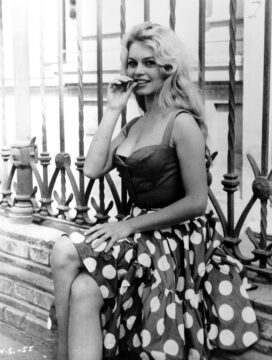 French actress Brigitte Bardot appeared in husband Roger Vadim‘s 1956 movie And God Created Woman and became a star as a blonde and wild — but innocent — “sex kitten” of the screen.

Under Vadim’s guidance during their marriage (1952-57), Bardot went from a child-woman teen model to an international sex symbol.

The image is easier to recall than most of her films, with some exceptions, including The Truth (1960) and Jean-Luc Godard‘s Contempt (1963).

Brigitte Bardot retired from films in 1974, but she still makes headlines on occasion — not as a sex symbol, but as an overzealous champion for animals and a harsh critic of Muslim immigrants.

Bardot was convicted in 2008 of violating France’s anti-racism laws for publicly condemning Muslims who slaughter sheep for the celebratory feast of Aid el-Kebir (Eid al-Adha), and has been fined several times since then for hate speech and inciting racial hatred.

Roger Vadim later married Jane Fonda… Other bombshell movie stars of the 1950s included Sophia Loren and Gina Lollobrigida… Pop songs she recorded in the 1960s with Serge Gainsbourg saw a resurgence in popularity in the 1990s, after Gainsbourg’s death in 1991.

Something in Common with Brigitte Bardot