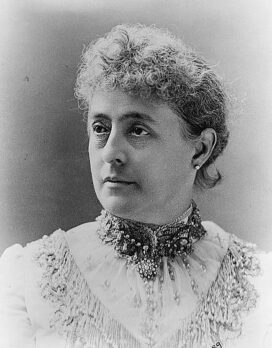 Caroline Lavinia Scott Harrison was the wife of U.S. President Benjamin Harrison and served as the First Lady from 1889 to 1893.

A preacher’s daughter, Caroline Scott graduated from Ohio’s Oxford Female Institute in 1853 with a degree in music. She married Benjamin Harrison that same year (on October 20th), and they settled in Indianapolis, Indiana.

While her husband fought in the Civil War, Caroline Harrison practiced law and dabbled in politics, raised their two children, gardened, painted a little and volunteered at church. Benjamin Harrison was surprisingly elected to the presidency in 1888 and served only one term — his is sandwiched between the two terms of Grover Cleveland — but in that time Caroline made a name for herself as an amiable and ambitious First Lady. She oversaw renovation, started the White House china collection and used her position to advance progressive causes, especially for women.

Caroline Harrison is said to have pressured John Hopkins University to admit women to their medical school, and she was the first President General of the Daughters of the American Revolution. She was also sick for years with tuberculosis. She took a turn for the worse in 1892, just as her husband was gearing up for a re-election campaign. Caroline died on October 25, just before Harrison lost the election to Grover Cleveland.

Caroline and Benjamin Harrison had two children, Russell Benjamin (1854-1936) and Mary Scott (1858-1930)… When the Harrisons were in the White House, they shared it with six other family members: their daughter Mary (“Mamie”); Mary’s husband, J. Robert McKee; their children, Benjamin Harrison McKee and Mary McKee; Caroline Harrison’s father, John W. Scott; and Caroline’s niece, Mary Lord Dimmick… The Harrisons were the first First Family to live in the White House with electricity. The story is they were afraid to use it.

Something in Common with Caroline Scott Harrison