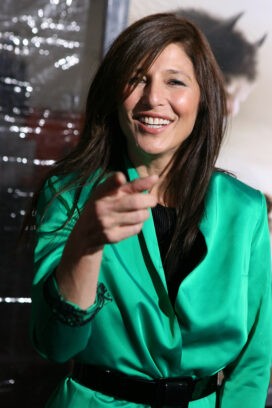 Catherine Keener came to be a movie star by way of stand-out performances in independent films, including Being John Malkovich (1999) and Bennett Miller‘s Capote (2005). A native of Miami, Keener started in theater while a student at Wheaton College in Massachusetts. A job at a casting agency led to a one-line part in About Last Night (1986). She has worked steadily ever since, often in supporting roles in independently produced films such as Living in Oblivion (1995, with Steve Buscemi), Walking and Talking (1996, with Anne Heche) and Steven Soderbergh‘s Out of Sight (1998). Keener was nominated for an Oscar as best supporting actress for her performance as sneaky and sexy Maxine in Being John Malkovich, and earned her second Oscar nomination for portraying writer Harper Lee in Capote (starring Philip Seymour Hoffman as Truman Capote). Her other films include The Interpreter (2005, with Sean Penn) and The 40 Year Old Virgin (2005), Into the Wild (2007. starring Emile Hirsch), Synecdoche, New York (2008, starring Philip Seymour Hoffman) and Spike Jonez‘s Where the Wild Things Are (2009, starring Max Records).

Something in Common with Catherine Keener