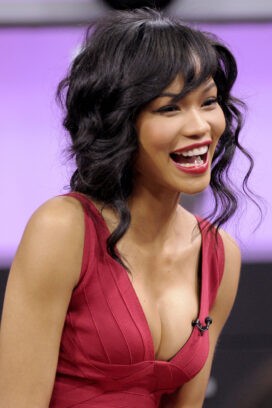 Chanel Iman is the American model of part-Korean heritage who became a regular in the Victoria’s Secret stable in 2009. Chanel Iman was “named after legendary designer Coco Chanel,” according a Page Six Magazine story in 2009. She began modeling at age 12 in Los Angeles. 2006 was the year she broke through as a runway model in Paris, Milan and New York, getting noticed in part for her signature winks to the audience on each trip down the catwalk. She was only 15. The next year she was on the cover of Vogue and in 2008 she was on the cover of Time magazine’s fall fashion issue. She was named a Victoria’s Secret “Angel” in 2009 and became closely associated with that company, appearing on its annual holiday TV show in 2009 and 2010.

Chanel Iman is 5’10” tall, according to the CBS/Victoria’s Secret website… She was born in Atlanta but moved to Los Angeles with her family as a child… According to Chanel Iman’s official site, “Chanel’s mother, China Robinson, is half African-American and half Korean; her father, basketball coach George ‘Tic’ Price, is African-American”… In 2009 she told Vogue magazine that she enjoyed a shoot for Vogue Korea “because I was able to take my Mom back to her birth place in style”… Iman has a tattoo of a wire clothes hanger, along with “Chanel Iman,” on the back of her neck… Page Six Magazine and other sources have reported that she is named for Somali supermodel Iman, but that’s not the case. Chanel Iman told V magazine in 2009, “My middle name comes from my cousin, who was named Iman, but he’s a boy. And Chanel comes from a book on Coco that my mom was reading when she was pregnant.”

Something in Common with Chanel Iman