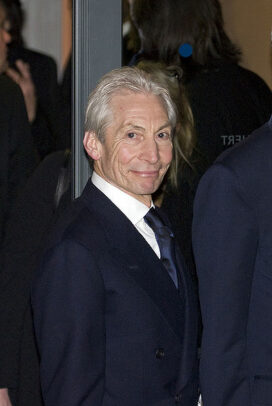 For almost 60 years Charlie Watts was the drummer for the ageless rock band The Rolling Stones.

Watts was born in London and became fascinated with jazz stars like John Coltrane as he entered his teens.

He left school at age 16, studied at the Harrow School of Art, and began working at an ad agency while playing drums with various blues and rock bands around London.

It didn’t take long for the band to click: the next year they hit the charts with “It’s All Over Now.”

In 1965 they unleashed the megahit single “Satisfaction,” which had all of the band’s soon-to-be trademarks: brilliantly brash guitar lines, anti-establishment attitude, lyrics crooned by Jagger with lurid delight and Watt’s driving beat.

In later years he returned to his jazz roots, leading a series of well-respected jazz bands and recording his own albums including Tribute to Charlie Parker (1992), Long Ago and Far Away (1996) and The Magic of Boogie Woogie (2010).

Charlie Watts married Shirley Ann Shephard in 1964. Their only child, a daughter named Seraphina, was born in 1968, and they remained married until Charlie’s death… Charlie Watts was diagnosed with throat cancer in 2004, but was treated and recovered… In the 1980s, Watts and his wife founded Halsdon Arabians.

Something in Common with Charlie Watts