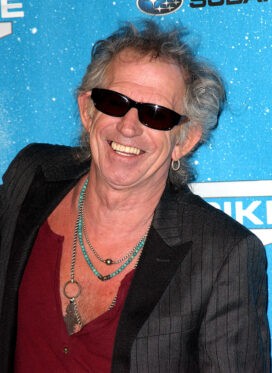 Keith Richards and a schoolmate, Mick Jagger, fell in together in the early 1960s and formed the rock band The Rolling Stones with Brian Jones. Losing and adding a few other band members along the way, The Rolling Stones made a name for themselves with up-tempo cover tunes that hit the charts in 1963 and 1964, such as their version of Buddy Holly‘s “Not Fade Away.” Richards and Jagger started writing their own songs in 1965 and the hits began to pile up, fueled by Richards’ bluesy, chunky guitar riffs. The Stones went on to a legendary career, recording and performing for the next four decades. Richards did his best to live up to the band’s bad-boy image: hard partying and indestructibility became his hallmarks. (His increasingly lined and weatherbeaten face made him a kind of anti-Dick Clark, prematurely aged and always looking as if he was at death’s door.) The Rolling Stones’ hits included “(I Can’t Get No) Satisfaction,” “Jumpin’ Jack Flash,” “Honky-Tonk Woman,” ” “Miss You” and “Start Me Up.” Keith Richards released his first solo album in 1988, and since then he has worked both with the Stones and on other solo projects. He had a small role as a pirate in the 2007 sequel Pirates of the Caribbean: At World’s End, a bit of an inside joke launched after Johnny Depp admitted patterning his own pirate character, Jack Sparrow, on Richards in earlier films. Keith Richards published an autobiography, Life, in 2010.

Keith Richards has acknowledged using drugs in the 1960s and 1970s, particularly heroin. In 2010 interviews he said he had been off heroin for 30 years… Richards had three children with actress Anita Pallenberg, whom he dated for several years but never married. Those children are son Marlon (b. 1969), daughter Dandelion (aka Angela, b. 1972), and son Tara (b. 1976). Tara died a few months after his birth… Keith Richards married model Patti Hansen in 1983. They have two daughters: Theodora (b. 1985) and Alexandra (b. 1986)… Richards was injured in Fiji in 2006 when he reportedly fell out of a tree while on vacation. He underwent brain surgery in Aukland, New Zealand, but returned to touring with the Stones later that summer… He is affectionately called “Keef” by many fans.

Something in Common with Keith Richards