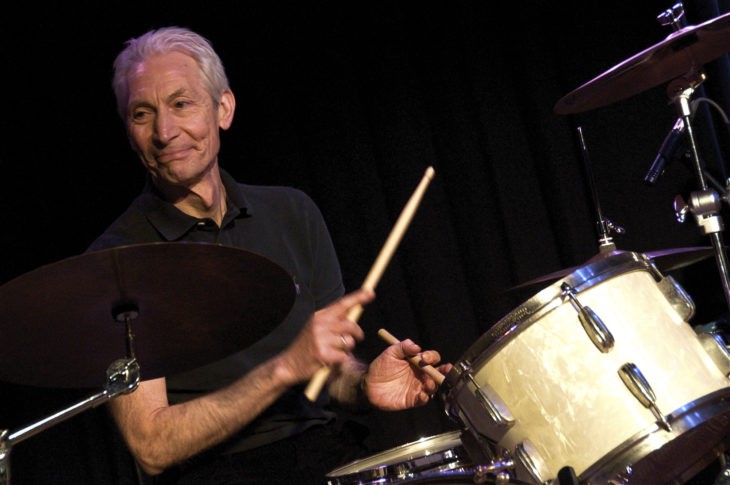 Charlie Watts plays in Herisau, Switzerland in 2010. (Photo by Poiseon Bild & Text, via Wikimedia Commons under a Creative Commons license.)

Charlie Watts, rock-steady drummer for the Rolling Stones since 1963, has died at a London hospital. The band’s official Twitter feed shared the news earlier today:

58 years with one band is a long time. When Watts started drumming for the Stones, John F. Kennedy was president, Harold Macmillan was prime minister, and Queen Elizabeth II was only 36 years old. Here’s what some leading publications have to say about Watts and his impact.

Rolling Stone magazine: “His light touch, singular rhythmic sense, and impeccable feel, as heard on canonical rock songs such as ‘Paint It, Black,’ ‘Gimme Shelter,’ and ‘Brown Sugar,’ made him both the engine that powered the Stones’ music and one of the most famous and respected drummers of all time.”

The Guardian: “With his limber stance, keen knowledge of jazz, and unruffled ability to make songs swing even when keeping the strictest time, Watts is regarded as one of the greatest – and most stylish – rock drummers of all time.”

The BBC: “He wasn’t known for the frenzied solos of Cream’s Ginger Baker, or for placing explosives in his kick drum like The Who’s Keith Moon. Instead, he was the subtle, stoic heartbeat of The Rolling Stones for almost 60 years.”

Reuters: “Watts was always known as a keen shopper and a snappy dresser. The Daily Telegraph once named him one of the World’s Best Dressed Men and in 2006 Vanity Fair inducted him into the International Best Dressed List Hall of Fame. ‘It’s supposed to be sex and drugs and rock and roll,’ he once said. ‘I’m not really like that.'”

Variety: “Watts was never a flashy drummer, but driving the beat for ‘The World’s Greatest Rock and Roll Band’ for a two-hour set — in a stadium, no less — is an act of great physical endurance that Watts performed until he was 78.”

Charlie Watts, along with the rest of the Rolling Stones, was inducted into the Rock Hall of Fame in 1989. The band has been planning for its announced No Filter tour this fall, with drummer Steve Jordan filling in for Watts. No word on if the tour will go on.

Tags: Celebrity Obituaries Charlie Watts Died in 2021 drumming Rock and Roll The Rolling Stones
John Glenn and the ‘Problem’ of ‘Lady Astronauts’
Ed Asner, star of Lou Grant and Up, has died at age 91