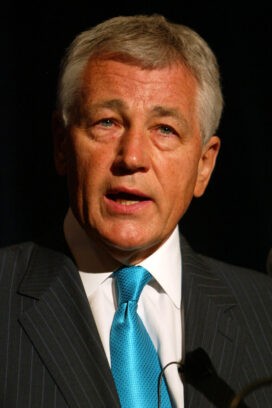 A former two-term Republican Senator from Nebraska, Chuck Hagel became the U.S. Secreatry of Defense in 2013 but resigned abruptly in November of 2014. Chuck Hagel is a decorated Army veteran who was an infantry squadron leader in Vietnam during 1967 and 1968. He and his younger brother, Tom, served together and were wounded together (Chuck has two Purple Heart decorations). After the war, Chuck Hagel got his degree from the University of Omaha and went to work for Republican Congressman John Y. McCollister (1971-76). For the next 20 years, Hagel worked in Washington as a lobbyist for Firestone Tires, as President Ronald Reagan‘s Deputy Administrator of Veterans Affairs, as the director of the United Service Organizations (USO) and as a private sector entrepreneur (Vanguard cellular phones). He moved back to Nebraska in 1992 and was elected to the Senate in 1996, vowing to serve only two terms. Good to his word, he retired from the Senate in 2008 and joined the faculty of Georgetown University in 2009. As a Republican senator, Hagel supported the George W. Bush administration in its response to attacks on the U.S. in September of 2011 and okayed the Patriot Act and the war in Afghanistan, but by 2005 he was publicly skeptical of the U.S. mission in Iraq. By 2007 he was openly opposed to more U.S. forces in Iraq and went on the record as calling the Bush administration incompetent. He was nominated to be Secretary of Defense by President Barack Obama as Obama began his second term in 2013. Hagel’s statements on Iraq and his alleged ambivalence to the plight of Israel — as well as peripheral political trivia — caused difficulties during his Senate confirmation hearings, as leading Republican senators grilled Hagel angrily and delayed his confirmation with a filibuster as a show of indignation. However, the Senate finally confirmed Hagel by a vote of 58-41 on February 26, 2013. He resigned abruptly on 24 November 2014, with the New York Times reporting that he had stepped down “under pressure” from President Obama. Hagel said he would remain on the job until a replacement was appointed by Obama and confirmed by the Senate.

Chuck Hagel replaced Secretary of Defense Leon Panetta, who served in that office from 2011-2013.

Something in Common with Chuck Hagel