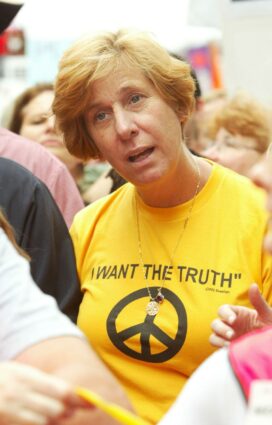 Cindy Sheehan began camping the near the Crawford, Texas home of President George W. Bush in August of 2005, in protest against the U.S. occupation of Iraq. Sheehan was the mother of Army Specialist Casey Sheehan, a soldier who was killed near Baghdad on 4 April 2004. Sheehan announced that she would camp near the president’s ranch until he agreed to talk to her about the U.S. policy in Iraq. Her vigil in Texas drew both pro-Sheehan protesters and counter-protesters, as well as national media coverage. President Bush refused to meet with Sheehan, explaining that to remove troops from Iraq would be a mistake and that he needed to “go on” with his life. Dubbed “Peace Mom” by the press, Sheehan then moved her protests to Washington, D.C., where she was arrested during an anti-war demonstration outside the White House on 26 September 2005. She was arrested again on 31 January 2006 and charged with unlawful conduct after displaying an anti-war slogan while attending President Bush’s State of the Union address; the charges were dropped the next day. Sheehan continued her protests until May of 2007, when she announced her “resignation” from her role as the public face of anti-war protests, saying she would return to California to rebuild her private life.

Sheehan and her husband, Pat, did meet briefly with Bush two months after Casey’s death; the Sheehans said they opposed the president’s policy in Iraq at the time, but chose to avoid a confrontation.

Something in Common with Cindy Sheehan