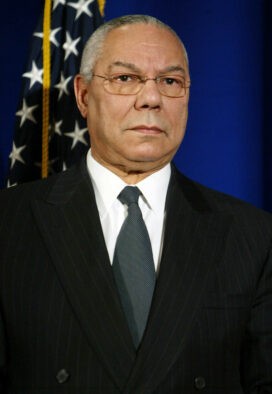 Colin Powell was the first Black American to be U.S. Secretary of State. He served in that office from 2001-05.

Colin Powell was a career soldier who fought in the U.S. Army during the Vietnam War. He rose through the ranks to become a general, then he became national security adviser to President Ronald Reagan. Powell became chairman of the Joint Chiefs of Staff under George Bush the elder, directing U.S. forces during the first Gulf War.

He then retired from the military in 1993 and published his autobiography, My American Journey, in 1995. After years on the lecture circuit, he was chosen by George W. Bush to be Secretary of State in 2001.

Colin Powell “often found himself the odd man out in an administration dominated by neoconservative ideologues who were dubious about the usefulness of the United Nations and NATO and all too ready to employ U.S. military power,” said The Washington Post in its 2021 obituary of Powell. Still, he was the face on TV when it came to convince the world that Iraq had weapons of mass destruction and should be invaded by U.S. and allied forces. Powell spoke firmly on the topic to the United Nations in February of 2003, and the United States invaded Iraq six weeks later. No weapons of mass destruction were found, and American troops became occupiers.

U.S. troop withdrawal from Iraq began in 2019, sixteen years after the invasion. Powell and others in the Bush administration admitted to an intelligence failure, but questions remain about what was known by Powell at the time of his U.N. presentation. He submitted his resignation to Bush in November of 2004, shortly after Bush won election to a second term. Powell was succeeded as Secretary of State by Condoleezza Rice, the first black woman to hold the job.

Powell then flirted with presidential politics as a Republican, but by 2016 was drifting away from what he called “fringe” influences on the party. He supported Democrat Barack Obama in the elections of 2008 and 2012. A longtime critic of President Donald Trump, Powell announced he would leave the Republican party after Trump urged supporters to overturn the 2020 election results and they launched a violent attack on the nation’s capital on January 6, 2021.

Colin Powell died on October 18, 2021, after contracting Covid-19. He had been vaccinated for Covid, but also was fighting Parkinson’s disease and the blood cancer known as multiple myeloma.

Colin Powell was married to the former Alma Johnson from 1962 until his death in 2021. They had three children: Michael (born 1963), Linda (b. 1965), and Annemarie. Michael Powell was Chairman of the U.S. Federal Communications Commission from 2001-2005, the same years that Colin Powell was Secretary of State; Michael later became a lobbyist. Linda Powell is an actress who has had small roles in a variety of films and TV shows, including recurring guest roles on Chicago Hope and Law & Order: Special Victims Unit.

Something in Common with Colin Powell