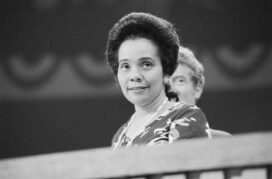 The couple met in Boston, where Coretta Scott was studying voice at the New England Conservatory of Music, and Martin Luther King was studying theology at Boston University. They were married on June 18, 1953, when Scott was 26 years old. The family moved to Montgomery, Alabama and then to Atlanta as Dr. King became a civil rights leader and a prominent public figure.

After Dr. King’s assassination in 1968, Coretta King established the King Center for Nonviolent Social Change in Atlanta. She also supported the establishment of a national holiday in honor of her husband, an idea which became law under President Ronald Reagan in 1986.

The annual Coretta Scott King Award, created to honor children’s book authors and illustrators of African descent, was created by the American Library Association (ALA) in 1969.

Something in Common with Coretta Scott King