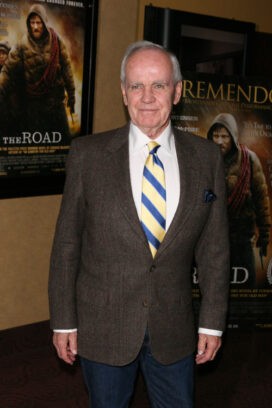 Cormac McCarthy’s first novel, The Orchard Keeper (1965), won a Faulkner Award, and subsequent grants and fellowships allowed him to continue writing novels while he lived in Tennessee and Texas. Although his novels Outer Dark (1968), Child of God (1973) and Suttree (1979) solidified his literary reputation, he was relatively unknown until 1985’s Blood Meridian, a violent epic about the American west. During the ’90s McCarthy, hailed as a prose stylist in the tradition of Hemingway and Faulkner, became famous for his literary westerns called The Border Trilogy: All the Pretty Horses (1992), The Crossing(1994) and Cities on the Plain (1998). His other novels include No Country for Old Men (2005) and The Road (2006).

Billy Bob Thornton directed Matt Damon and Penelope Cruz in the movie All The Pretty Horses (2000)… The Coen brothers made a movie of No Country for Old Men (2007, starring Tommy Lee Jones)
… There is another Cormac McCarthy, a folk singer and songwriter from New England. The two are not related.

Something in Common with Cormac McCarthy