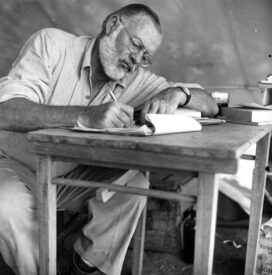 Ernest Hemingway is one of the most famous American writers of the 20th century, the author of A Farewell to Arms and The Sun Also Rises.

He wrote novels and short stories about outdoorsmen, expatriates, soldiers and other men of action, and his plainspoken no-frills writing style became so famous that it was (and still is) frequently parodied.

Hemingway’s dashing machismo was almost as famous as his writing: he lived in Paris, Cuba and Key West, fancied bullfighting and big game hunting, and served as a war correspondent in World War I and the Spanish Civil War.

His short novel The Old Man and the Sea (1952) won the Pulitzer Prize in 1953, and Hemingway was given the Nobel Prize for Literature in 1954.

Ernest Hemingway sealed his own notoriety when he killed himself with a shotgun in 1961.

After his death he was buried in Ketchum Cemetery in Ketchum, Idaho, the remote town where he had a home (and where he killed himself). His memoir of his early life in Paris, A Moveable Feast, was published posthumously in 1964.

Ernest Hemingway is also called by his familiar nickname “Papa”… His birthdate is sometimes listed in error as 1898. According to a 1954 article in the New York Times, “In most reference books and in his own conversation he is one year older because he gave 1898 as his birth date when he tried to enlist [in the army] early in 1917, and stuck to that date ever since”… Ernest Hemingway’s father also committed suicide, shooting himself with a Civil War pistol in 1928… He wrote several short stories about the character Nick Adams, his youthful alter ego; they were collected in The Nick Adams Stories in 1972… Ernest Hemingway was married four times: to Hadley Richardson (1921-27; she’s featured in A Moveable Feast); to Pauline Pfeiffer (1927-40); to Martha Gelhorn (1940-45) and to Mary Welsh (1946 until his death in 1961). He had three sons: Jack (with Hadley, called “Bumby” in A Moveable Feast, b. 1923), and Patrick (b. 1928) and Gregory (b. 1931), both with Pauline… The model Margaux Hemingway (1954-96) and Mariel Hemingway (b. 1961) are Jack Hemingway’s daughters and Ernest Hemingway’s granddaughters. Mariel’s daughter Dree Hemingway (b. 1987) is a model.

Something in Common with Ernest Hemingway