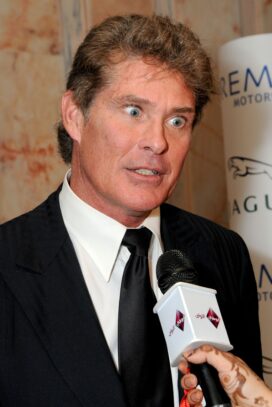 Television actor David Hasselhoff is best known as the lead hunk in the the car-crazy action show Knight Rider and for his long run as the star of the girl-crazy beach show Baywatch.

David Hasselhoff spent his early career on the soap opera The Young and the Restless (1975-82). Tall and square-jawed, he was then partnered with a talking car named KITT for the fantasy adventure show Knight Rider (1982-86). Tongue-in-cheek storylines, plus Hasselhoff’s light touch with humor (and tight jeans), made the show a hit.

He was then cast as Lt. Mitch Bucannon in Baywatch, a life-on-the-beach soap opera that featured his then-wife Pamela Bach along with (over the years) actresses Pam Anderson, Yasmine Bleeth, Brook Burns, Alexandra Paul and Gena Lee Nolin. The show debuted on NBC in 1989 and was canceled in 1990. Hasselhoff came on board as executive producer and the show was syndicated for cable TV, where it became an international hit, both beloved and mocked for its mindless celebration of shapely bodies in bathing suits. Baywatch ran through 2001, and “The Hoff” became known more for his self-parodying self-promotion than his acting.

He appears occasionally in films, almost always as himself, and his messy divorce from Bach in 2007 put him in the tabloids on a regular basis. In 2006 Hasselhof became a judge on the NBC talent show America’s Got Talent, and in 2010 he leapt to the other side of the table, becoming a contestant (and the first contestant eliminated) on season 11 of Dancing With the Stars.

David Hasselhoff announced in November of 2015 that he had formally changed his name to David Hoff, dropping the “Hassel.” However, it was unclear if the name change was actually legal or just a gag or publicity stunt. We have, for now, retained “Hasselhoff” as his official name… KITT stood for Knight Industries Two Thousand, and David Hasselhoff’s character in Knight Rider was named Michael Knight… David Hasselhoff is 6’4″ tall… He is also singer. Since the late 1980s he has released a variety of albums and CDs, including the singles “Looking for Freedom” and “Jump in My Car”… His fellow contestants on Dancing With the Stars included Bristol Palin and Mike “The Situation” Sorrentino.

Something in Common with David Hasselhoff