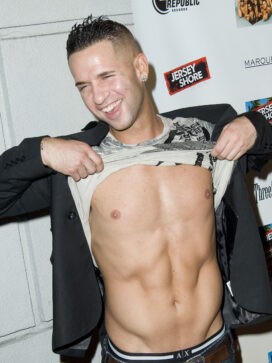 Mike Sorrentino is one of the breakout stars of the 2009 TV show Jersey Shore. Known by his self-chosen nickname of “The Situation,” he’s famous for baring his belly as a statement of self-confidence and as a would-be aphrodisiac.

While working in a fitness center, he was cast in the MTV series Jersey Shore, a modern-day soap opera made up of single co-eds abusing alcohol and beauty products in a vacation home in New Jersey.

The show’s use of the terms “Guidos” and “Guidettes” (males and females), and its casual comfortableness with Italian-American stereotypes, led to controversy before it even launched, but it proved to be a hit for MTV.

Sorrentino rose above the pack with his over-the-top bravado and effective abdominal self-promotion, and by the show’s second season (2010), he was expanding his celebrity brand to include a fitness video and a planned autobiography titled Here’s the Situation.

While trying to fuel businesses with his celebrity, Sorrentino ran afoul of the Internal Revenue Service and in 2018 entered a guilty plea for tax evasion.

Something in Common with Mike “The Situation” Sorrentino