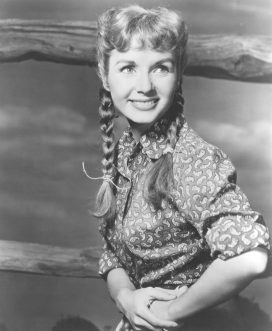 Actress Debbie Reynolds was the plucky star of Singin’ in the Rain and other hit musicals of the 1950s, and was the mother of actress Carrie Fisher.

Debbie Reynolds won the Miss Burbank contest at age 16, and soon signed with Warner Brothers to appear in her first film, The Daughter of Rosie O’Grady (1950). She moved to MGM the same year and had success in musicals like Two Weeks With Love (with Carleton Carpenter) before striking gold in the nostalgic and upbeat 1952 musical Singin’ In the Rain (with Gene Kelly). The film became a Hollywood musical classic and turned Reynolds into a star. Short, cute and zesty, with a touch of tomboy, she remained a box office draw for the next 15 years.

Her other films included Give a Girl a Break (1953), The Tender Trap (1955, with Frank Sinatra), the drama The Catered Affair (1956, with Bette Davis), Tammy and the Bachelor (1957, with Reynolds scoring a #1 hit song with the title ballad “Tammy”), Divorce American Style (1967, with Dick Van Dyke), the comedy Mother (1996) and the TV movie These Old Broads (2001, with Elizabeth Taylor, Shirley MacLaine and Joan Collins). She was Oscar-nominated as best actress for the 1964 musical The Unsinkable Molly Brown, but the winner that year was Julie Andrews for Mary Poppins.

She also voiced Charlotte the spider in the animated Charlotte’s Web (1973) and made many TV appearances. Her own series, The Debbie Reynolds Show, ran for 26 episodes from 1969-70, and she had a recurring role as Grace’s mother in the comedy Will & Grace (1999-2006). She was given a lifetime achievement award by the Screen Actors Guild in 2014, and received an honorary Oscar — the Jean Hersholt Humanitarian Award — in 2015.

Debbie Reynolds’ offscreen life was dramatic, to say the least. She married singing heartthrob Eddie Fisher in 1955, only to have him leave her for actress Elizabeth Taylor in 1958. With Fisher she had two children, the actress and writer Carrie Fisher (b. 1956) and the actor and director Todd Fisher (b. 1958).

Debbie Reynolds married shoe tycoon Harry Karl in 1960; they were divorced in 1973. She then married real estate tycoon Richard Hamlett in 1985, and they were divorced in 1996. “Her second and third marriages were personal and financial disasters,” the Los Angeles Times said after her death. Most notably, she and Hamlett opened an unsuccessful casino and hotel in Las Vegas in 1992, which closed in 1997; she declared bankruptcy the same year.

She published an autobiography, Debbie, in 1988. Her daughter Carrie Fisher starred as Princess Leia in the Star Wars film series; Carrie Fisher died unexpectedly in 2016, and Debbie Fisher died just one day later, after suffering a stroke at her home.

Debbie Reynolds says she was given her stage name by Warner Brothers studio chief Jack Warner, who thought “Mary Frances” was too old-fashioned.

Something in Common with Debbie Reynolds