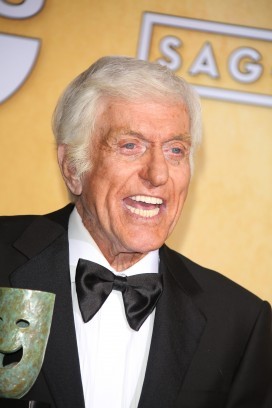 Career profile from the Museum of Broadcast Communications

Nice 2018 story about Van Dyke, as spry as ever

Juicy 1998 video interview from the Academy of Television

A song-and-dance man who got his start in radio, Dick Van Dyke made the leap to the big time when he starred in both the Broadway and Hollywood versions of the musical Bye Bye Birdie (1960 and 1963). Known for his light comic touch, he went on to greater fame as the charming chimney sweep Bert in the popular Walt Disney film Mary Poppins (1964).

The Dick Van Dyke Show was one of the most popular TV sitcoms of the 1960s, with Van Dyke playing a version of himself: a TV comedy writer who lived in a New York City suburb with his wife, played by Mary Tyler Moore. The show won Van Dyke three consecutive Emmys and stayed popular in reruns for decades. Diagnosis Murder was not as iconic but ran longer; Van Dyke played a crime-solving doctor who did his work with the help of a detective played by his real-life son, Barry Van Dyke.

In 2018, Dick Van Dyke appeared in the Disney sequel, Mary Poppins Returns, starring Emily Blunt and Lin-Manuel Miranda. While not playing Bert the chimney sweep in the sequel, he did once again play (at age 92) the rickety chairman of the Fidelity Fiduciary Bank.

Dick Van Dyke’s younger brother Jerry Van Dyke (1931-2018) was also an actor and comedian… Dick Van Dyke was married to the former Margerie Willett from 1948 until their divorce in 1984 (including a separation for the last years of the marriage). They had four children: Chris, Barry, Carrie Beth, and Stacy… Dick Van Dyke also had a long romantic relationship with Michelle Triola Marvin, previously known for her unsuccessful 1970s palimony suit against actor Lee Marvin; Van Dyke and Triola dated and lived together, but never married, from 1976 until her death in 2009… He then married makeup artist Arlene Silver on February 29, 2012. He was 86 at the time, she was 40… The Dick Van Dyke Show was set in New Rochelle, New York; Van Dyke and Moore’s characters were Rob and Laura Petrie.

Something in Common with Dick Van Dyke