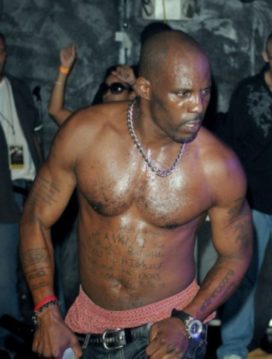 DMX (also known as Dark Man X) was a hard core rapper from the East Coast school, known for his aggressively brutal raps. After his death in 2021, The New York Times called him a “muscular and intense” figure, known for a “remarkable and combative stage presence” and “albums that reflected his gritty past and featured a gruff and unmistakable lyrical style.”

DMX’s 1998 single “Get At Me Dog” was a top-40 hit that pushed him into the upper tier of popular rappers and revived the strength of the Def Jam record label. The same year his debut album It’s Dark, and Hell is Hot went to #1 on the Billboard charts.

DMX also recorded with the Ruff Ryders, a loose conglomeration of hip-hop all-stars. DMX then veered into acting and appeared in Romeo Must Die (2000, with Jet Li), Exit Wounds (2001, with Steven Seagal) and Never Die Alone (2004, with Michael Ealy).

In 2006 DMX (sometimes called “Dog”) was in the spotlight again, with a new album (Year of the Dog, Again, on the SonyBMG label) and a reality series on the BET cable network, DMX: Soul of a Man.

DMX published a memoir, E.A.R.L.: The Autobiography of DMX, in 2003, in which he described a youth filled with struggle and forays into drug use, car theft and robbery. True to his persona, DMX had many run-ins with the law even after becoming famous, being arrested at various times for weapons possession, assault, fraud, driving under the influence, and cruelty to animals. In his last big hassle, he was sentenced to a year in prison for tax evasion in 2018.

DMX died at age 50 in 2021 after reportedly suffering a heart attack induced by a drug overdose.

DMX took his name from the DMX digital sound machine… In spring of 2001 DMX served 10 days in a New York jail for driving without a license. In 2005 he was sentenced to 70 days in jail for violating conditions of a plea agreement from a 2004 incident at Kennedy Airport… He was arrested twice in one week in May 2008, both in Phoenix: first for speeding, and then on an indictment for felony drug possession and misdemeanor acts of animal cruelty, reportedly involving mistreatment of pit bulls… The website TMZ reported after his death that DMX was “survived by his 15 children. The youngest was born in 2016 to his fiancee, Desiree Lindstrom.”

Something in Common with DMX