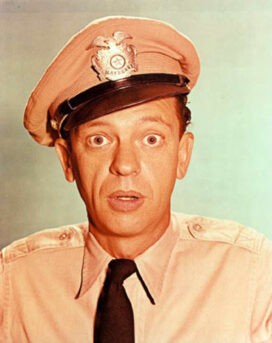 Pop-eyed and pencil-necked, Don Knotts made a career out of playing jittery underdogs with wavering voices and big dreams. Knotts was a regular on the original Tonight Show with Steve Allen, where he broke in an ongoing routine called simply the Nervous Man. He then won a remarkable five Emmy Awards as Barney Fife, the bumbling deputy sheriff of Mayberry on the hit sitcom The Andy Griffith Show. Knotts seemed always on the verge of a nervous breakdown in a string of movies with titles like The Ghost and Mr. Chicken (1966), The Reluctant Astronaut (1967), The Shakiest Gun In the West (1968) and Hot Lead and Cold Feet (1978). He hosted his own short-lived variety show, The Don Knotts Show (which featured a pre-M*A*S*H Gary Burghoff), from 1970-71. Knotts gathered a second generation of fans when he played the wannabe-swinger Ralph Furley on Three’s Company from 1979-84.

Knotts served in the U.S. Army during World War II, performing for troops as a comedian and ventriloquist. There’s no truth to the Intenet rumor that he was once a Marine drill sergeant… The Andy Griffith Show ran from 1960 until 1968; Knotts left the show after its fifth season but made occasional return appearances… Knotts won Emmy Awards as best actor in a supporting role in 1961, 1962, 1963, 1966 and 1967 — the last two for episodes done after he had stopped being a show regular.

Something in Common with Don Knotts