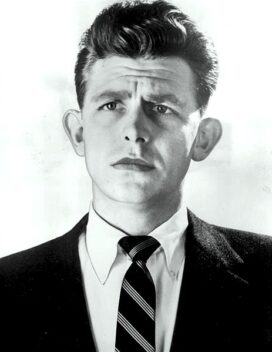 Andy Griffith got his start in the 1950s playing a country yokel, on radio and in recorded routines like “What It Was, Was Football.”

Two years later he began his run on The Andy Griffith Show, a gentle comedy that cast Griffith as a warm-hearted small-town sheriff in the southern town of Mayberry. The show co-starred Ron Howard as Griffith’s freckled son Opie, and Don Knotts as Sheriff Andy’s comical deputy Barney Fife.

The show ran until 1968 and continued its popularity in decades of reruns. After several misfires during the 1970s, Griffith scored again with Matlock, in which he played a country-crafty trial lawyer (the show was such a hit with senior citizens that it became a running punch line for comedians).

Despite Andy Griffith’s extreme popularity, he was never nominated for an Emmy Award for either Matlock or The Andy Griffith Show (though he was nominated in for his supporting role in the 1981 TV movie Murder in Texas).

Something in Common with Andy Griffith