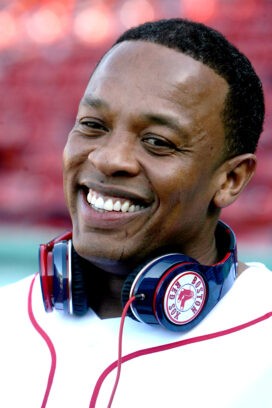 Music producer, hip hop performer and businessman Andre Young — a.k.a. Dr. Dre — co-founded the notorious rap group N.W.A. (with Ice Cube and Eazy-E). The group was one of the most successful hip-hop groups of the late 1980s and helped lay the foundations of what’s known as West Coast “gangsta” rap.

In 1991, Dre got out of his deal with Ruthless Records and co-founded Death Row Records with Suge Knight. Dre’s 1992 solo effort, The Chronic, was a critical and popular success and made his fame as a producer. He also won a Grammy for the album’s single, “Let Me Ride.”

Dr. Dre helped launch the careers of Warren G., Snoop Dogg and Eve of Destruction, and went on to collaborate with a variety of artists, including 50 Cent, Eminem and The Game.

Dr. Dre has also made his mark as a businessman. With music mogul Jimmy Iovine he co-founded the headphone company Beats by Dr. Dre. The high-end headphones were a big success, worn by everyone from musicians and actors to athletes like LeBron James. Electronics giant Apple bought the company for $3 billion in 2014.

Something in Common with Dr. Dre