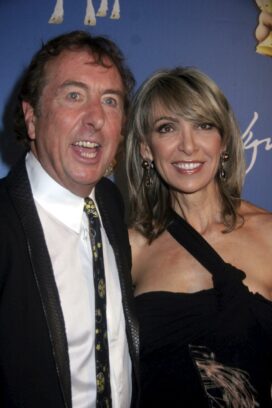 Eric Idle was one of the core members of the comedy troupe who starred in the hit TV show Monty Python’s Flying Circus (1969-74) and one of “The Rutles,” a satirical rock band based on The Beatles. Like fellow Monty Python founder John Cleese, Idle was a member of Cambridge’s Footlights comedy revue. The success of Monty Python’s television show led to several feature films that Idle appeared in and co-scripted, including Monty Python and the Holy Grail (1975) and Life of Brian (1979). Apart from Monty Python, Idle created the mockumentary TV feature The Rutles: All You Need Is Cash (1978) and has appeared in several television and movie roles, including voice work in features such as 102 Dalmations (2000, with Glenn Close) and Ella Enchanted (2004, with Anne Hathaway). In 2005 Idle’s stage adaptation of Monty Python and the Holy Grail, titled SpamAlot (starring Tim Curry), earned him the Tony Awards for Best Book of a Musical and for Best Original Score.

Idle is the “nudge, nudge, wink, wink” guy in the famous Monty Python sketch… A guitarist and songwriter, Idle was responsible for most of Monty Python’s songs, including “Always Look on the Bright Side of Life.”

Something in Common with Eric Idle