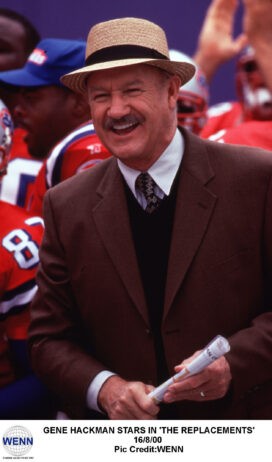 Gene Hackman became one of America’s best-known film actors in 1971, when he starred as impudent New York cop Popeye Doyle in The French Connection. Since then he has mixed leading and supporting roles, frequently playing silky villains or rough-and-regular heroes. Some of his more memorable movies have been The Conversation (1974, directed by Francis Ford Coppola), Hoosiers (1986) and Get Shorty (1995, with John Travolta). Hackman has been nominated for five Academy Awards, winning Best Actor for The French Connection and Best Supporting Actor for the 1992 Clint Eastwood western Unforgiven. In 2001 he appeared with Gwyneth Paltrow and Ben Stiller in the comedy The Royal Tenenbaums. His recent films include Behind Enemy Lines (2001, with Owen Wilson) and Runaway Jury (2003, with John Cusack and Rachel Weisz).

At age 16 Hackman quit school, lied about his age, and joined the Marines… He co-authored the novels Wake of the Perdido Star (1999) and Justice for None (2004) with writer Daniel Lenihan.

Something in Common with Gene Hackman