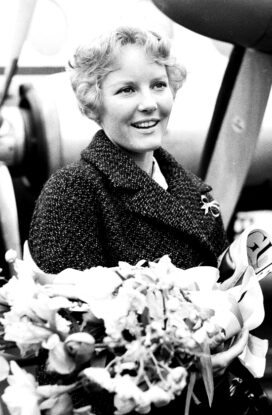 Petula Clark had her greatest popularity during the 1960s as a singer of optimistic pop tunes like her signature hit “Downtown,” which was a hit in the U.K. in 1964 and went to #1 on the Billboard Hot 100 in 1965.

Petula Clark had been a child star in England and even had her own BBC radio show, “Pet’s Parlor,” during World War II. As a young woman she appeared in a variety of British movies, including the comedy I Know Where I’m Going! (1946) and Dance Hall (1950). In the 1960s she was a pop star, partly on the overwhelming strength of “Downtown.” That led to her appearance in the high-profile American features Finian’s Rainbow (1968, with Fred Astaire) and Goodbye, Mr. Chips (1969, with Peter O’Toole).

In later years, Petula Clark has continued to tour and perform live; in the 1990s she also starred as Norma Desmond in a touring edition of the play Sunset Boulevard.

Petula Clark married the French publicist Claude Wolff in 1961; they had three children. In 2013, Clark told The Guardian that “We’re not in a romantic relationship any more but we’re not divorced. That’s an area I have kept very private deliberately”… In 1997, Queen Elizabeth made Petula Clark a Commander of the Order of the British Empire… Petula Clark was a matron of honor at the 2002 wedding of Liza Minnelli… Her hit “Downtown” was written by composer Tony Hatch.

Something in Common with Petula Clark