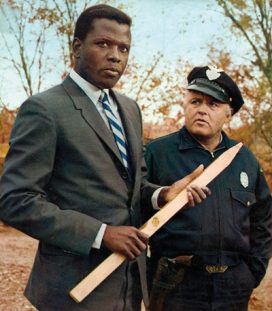 A major movie star of the 1960s, Sidney Poitier was the first African-American to win the Academy Award as best actor.

Sidney Poitier grew up in the Bahamas, then came to the U.S. to start his acting career. He made his movie debut in 1950, but it was his co-starring role in 1958’s The Defiant Ones (as an escaped prisoner handcuffed to Tony Curtis) that made him a star.

In that era of civil rights marches, Poitier was often cast in roles that highlighted racial tension: In the Heat of the Night featured him as a Philadelphia cop clashing with a small-town Southern sheriff, and in Guess Who’s Coming To Dinner he was an accomplished black doctor whose engagement to a white woman worries both sets of parents.

After a decade away from the big screen, he returned to acting in the late 1980s, appearing in Sneakers (1992, with Robert Redford) and The Jackal (1997, with Bruce Willis and Richard Gere).

Sidney Poitier was given Kennedy Center Honors in 1995, and in 2002 he received a special Academy Award saluting his career. President Barack Obama presented him with the Presidential Medal of Freedom in 2009.

Sydney Poitier dropped out of school when he was 13, moved to Miami and then to New York City when he was 15, then he joined the army at the age of 16 (he said he was 18)… Sidney Poitier was married twice: to Juanita Hardy from 1950 until their divorce in 1965, and to actress Joanna Shimkus from 1976 until his death in 2022. He had six children, including the actress Sydney Poitier (born 1973)… Sidney Poitier was appointed as ambassador to Japan from the Bahamas in 1997… In 2002, the same year that Sidney Poitier won his honorary Oscar, Denzel Washington was named best actor — becoming the first African-American winner of that prize since Poitier in 1963… Also in 2002, Halle Berry became the first African-American to win the Oscar for best actress.

Something in Common with Sidney Poitier