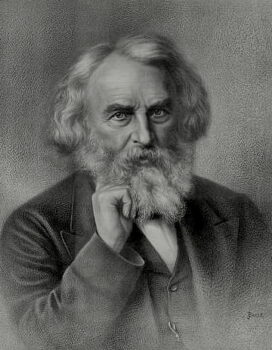 Henry Wadsworth Longfellow was a giant of 19th century American literature, a celebrated poet whose work included “Paul Revere’s Ride” and the long narrative poems The Song of Hiawatha and Evangeline.

A lifelong resident of New England, Longfellow studied at Maine’s Bowdoin College and graduated in 1825, ending up with a job at the college as a professor of languages. To prepare, he first spent three years in Europe; he stayed at Bowdoin as a professor and librarian until 1835. From then until 1854, he was a professor of modern languages at Harvard.

While at Harvard, Longfellow published some of the best-known and popular poems of the era, including “The Village Blacksmith” and “The Wreck of the Hesperus” (from the 1841 collection Ballads and Other Poems).

By the time he left Harvard he was making a good living as a poet — his savvy marketing and popular appeal made poems such as 1847’s Evangeline best sellers.

His narrative poems The Song of Hiawatha (1855) and The Courtship of Miles Standish (1858) were also popular, and helped give a mythic core to American literature, the first being based on Native American legends, the second being based the early European colonists.

Longfellow’s 1863 poem “Paul Revere‘s Ride” was taught to schoolchildren for generations, and most Americans recognize and can recite the opening lines: “Listen my children, and you shall hear/ Of the midnight ride of Paul Revere.”

Longfellow had tremendous professional success, but he also knew personal tragedy. His first wife, Mary Potter, died during a miscarriage in 1835 while they were touring Europe — they’d been married just four years. With his second wife, Fanny Appleton (m. 1843), Longfellow had six children, only five of whom lived to adulthood. Fanny was killed in an accidental fire in 1861, a fire that left Longfellow with scars on his face (that’s why he grew the beard we see in later portraits).

After his second wife’s death, Longfellow translated Dante‘s Divine Comedy. By modern standards, Longfellow’s poetry considered didactic and sentimental, but there’s general agreement that he was among the earliest writers to establish purely American themes.

Something in Common with Henry Wadsworth Longfellow