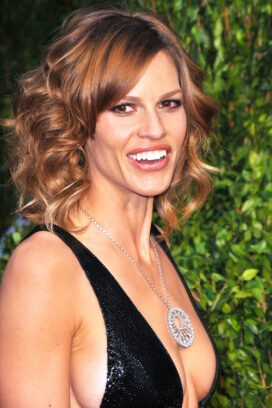 Swank got her start in the early 1990s with small roles in movies and TV shows. Her first big break came with the movie The Next Karate Kid (1994), in a leading role that made good use of her background in swimming and gymnastics.

In Boys Don’t Cry she gave a stunning performance as a young woman who lived as a young man; Swank’s Oscar for best actress led to bigger roles and bigger paychecks. (She reportedly was paid a mere $3,000 — $75 per day — for Boys Don’t Cry.)

Even so, what followed was less than impressive: small roles in The Gift (2000, with Keanu Reeves) and Insomnia (2002, starring Al Pacino), and a part in the big-budget flop The Core (2003).

For director Clint Eastwood‘s Million Dollar Baby, Swank trained rigorously, put 20 extra pounds on her lean frame and turned in a performance that earned her a second Oscar.

Despite two Oscars within five years, her star dimmed as a lead actress as she appeared in several low-performing films. Swank then pulled back from working to care for her ailing father in 2015.

Swank has appeared in horror films, romantic comedies, mystery thrillers, tearjerk dramas and cartoons over the years, including The Black Dahlia (2006), P.S. I Love You (2007 with Gerard Butler), Amelia (2009, a biopic of aviator Amelia Earhart) and What They Had (2018).

Million Dollar Baby won the Oscar as the best film of 2004, and Swank’s co-star Morgan Freeman won the Oscar as best supporting actor… Some sources list Swank’s birthplace as Lincoln, Nebraska, which is the birthplace of Teena Brandon, the transvestite whose story was the basis for Boys Don’t Cry.

Something in Common with Hilary Swank