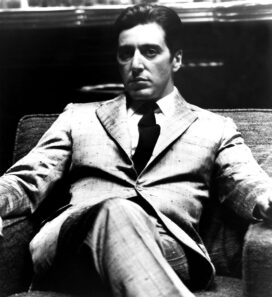 Al Pacino went from success on the New York stage to almost instant stardom in the movies, thanks to his Oscar-nominated role as Michael Corleone in Francis Ford Coppola‘s The Godfather (1972, also starring Marlon Brando).

One of the most celebrated actors in movie history, Pacino hasn’t lead a box office money-maker since 2002’s Insomnia (with Robin Williams), but he’s still going strong.

On television, Pacino starred as Dr. Jack Kevorkian in You Don’t Know Jack (2010) and won an Emmy. He also played the title roles in Phil Spector (2013) and Paterno (2018, and an Emmy nomination).

Something in Common with Al Pacino