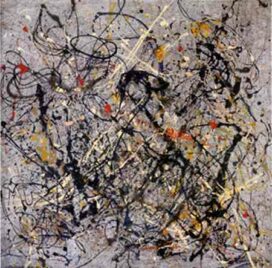 Jackson Pollock grew up in California and Arizona, but moved to New York in 1930, where he studied painting under painter Thomas Hart Benton. Pollock suffered from alcoholism and began undergoing psychiatric treatment in the late 1930s; he had a nervous breakdown in 1938 and was hospitalized briefly. He had his first one-man show in 1943, his works becoming more abstract. By the late 1940s he had developed a process for which he became famous, dripping paint onto flat canvasses to form abstract expressions of "unconscious imagery." He died in a car accident near his home on Long Island, New York.

Actor Ed Harris directed and starred in the 2000 movie about the painter, Pollock… In 2006 it was reported that entertainment mogul David Geffen sold Pollock’s No. 5, 1948 for a record $140 million.

Something in Common with Jackson Pollock