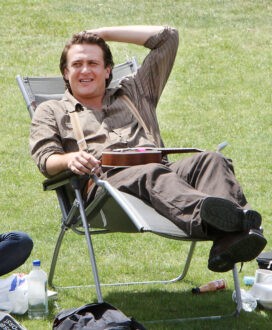 Jason Segel is a comic actor of TV and film who wrote and starred in the movie Forgetting Sarah Marshall.

The show was cancelled after one season and Segel turned more attention to screenwriting, while still getting acting jobs (including a few episodes of Apatow’s series Undeclared).

He is also known as a cast member of the Alyson Hannigan series How I Met Your Mother (2005-14); his film career took off after appearing in the Seth Rogen comedy Knocked Up (2007, starring Katherine Heigl).

Segel is 6′ 4″ and played basketball in high school.

Something in Common with Jason Segel