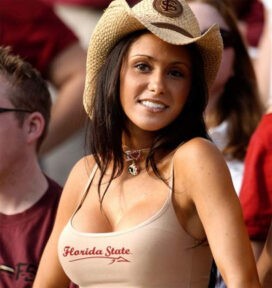 After Jenn Sterger and two friends were featured in a bleacher shot of the FSU-Miami football game on September 5, 2005, announcer Brent Musberger quipped that “Fifteen hundred red-blooded Americans just decided to apply to Florida State.” Some of those young men found her in bikini photos on the web portal Facebook, sent the link to friends, and Jenn Sterger was soon the online embodiment of the concupiscent co-ed.

Sterger embraced her fame, posing for Maxim and Playboy magazines in 2006. That same year she began writing a regular column for the website Sports Illustrated on Campus. She joined the NFL’s New York Jets in 2008 as a host for the team’s local game broadcasts. She left the Jets in 2009 and in 2010 began co-hosting a sports program, The Daily Line, on the cable channel Versus.

Jenn Sterger was nicknamed the Facebook Princess, and also the “FSU Cowgirl,” for her sartorial combinations of minimalist tops and cowboy hats in her early days of online fame… Jenn Sterger’s friend Chrystal Durnan appeared in many of her Florida State photos and became a minor sub-celebrity of her own… Jenn Sterger was back in the news in 2010 after the website Deadspin revealed that NFL quarterback Brett Favre had sent racy photos of himself to her cell phone. Favre was eventually fined $50,000 by the NFL; Sterger told Good Morning America that the episode was “humiliating.”

Something in Common with Jenn Sterger