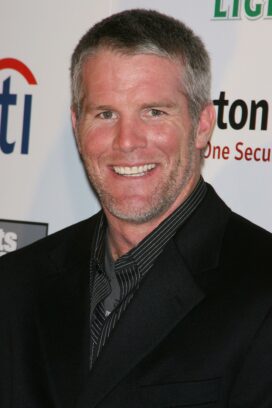 Brett Favre threw more touchdown passes than any previous NFL quarterback during his two-decade Hall of Fame career. He is best remembered as the starting quarterback for the Green Bay Packers from 1992-2007.

Favre was a favorite son of Mississippi because of his football career, but his reputation was tarnished in 2022 when it was discovered he had taken government funds intended for the poor, and had used the money instead to direct business to companies he’d invested in and had taken money for speeches he never made (he quickly returned $1.1 million in speaking fees, but not — according to the state of Mississippi — the $2.1 million he’d directed).

Like Johnny Unitas, Brett Favre had an inauspicious start to his career: after being drafted by the NFL’s Atlanta Falcons in 1991 (in the second round, the 33rd pick overall), he played only two games with Atlanta before being traded to Green Bay in 1992.

Favre was known as a fierce competitor who liked to sling the ball; he also had a reputation for toughness and for shrugging away injuries, and set a record for most consecutive starts (297) among NFL players.

In his last few years with Green Bay, Favre hinted at retirement; he finally did retire in March of 2008, but then unretired in August of that year, and the Packers traded him to the New York Jets.

After a strong start, the Jets finished that season poorly and Favre again retired from football. But! He un-retired again in 2009, signing a two-year contract to play for the Minnesota Vikings. That’s where he finished out his career, sustaining a concussion in his last game on December 20, 2010 and formally retiring on January 17, 2011.

Brett Favre was elected to the Pro Football Hall of Fame in 2016.

Brett Favre broke the record for touchdown passes on 30 September 2007, when he threw his 421st and 422nd against the Minnesota Vikings in a 23-16 Packer win. That record was later broken by Peyton Manning… Brett Favre shared the 1997 NFL MVP award with Detroit running back Barry Sanders… Brett Favre is the first and only NFL player to win the MVP award three seasons in a row… Brett Favre was sidelined with a shoulder injury in December of 2010, ending his streak of 297 consecutive starts… For his career, Brett Favre completed 6300 passes on 10,169 attempts.

Something in Common with Brett Favre