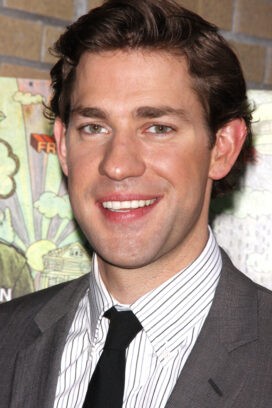 Actor John Krasinski shot to fame as Jim Halpert, the amiable prankster from the American version of TV’s The Office.

John Krasinski grew up in Newton, Massachusetts and graduated from Rhode Island’s Brown University (2002), where he studied playwriting. He began his acting career in New York, where he first found work in TV commercials. In Hollywood he appeared in small roles on TV and in movies, then landed the part of Halpert in 2004.

Halpert’s unrequited love for co-worker Pam (Jenna Fischer) became the dominant storyline, and Krasinski’s turn as a rogue-ish boy-next-door found an adoring audience. By the end of 2005 he emerged as one of the central characters of The Office, and his career was off and running.

On the big screen, Krasinski played opposite Mandy Moore in the 2007 comedy License to Wed (with Robin Williams), co-starred in the George Clooney-directed comedy Leatherheads (2007) and had the lead in Away We Go (2009). Krasinski’s other films include Jarhead (2005, starring Jake Gyllenhaal),  Dreamgirls (2006, starring Jennifer Hudson), and, as director and star, The Hollars (2016).

He married actress Emily Blunt on 10 July 2010… Krasinski and fellow Office player/writer B.J. Novak grew up together in Newton, coincidentally ending up on the same TV show as adult performers.

Something in Common with John Krasinski