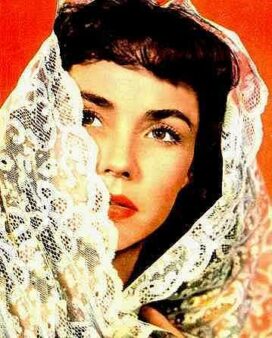 Jennifer Jones was a top box-office draw and multiple Oscar nominee during the 1940s and ’50s, known for her off-screen love affair with producer David O. Selznick as much as for her varied on-screen performances. She grew up in Oklahoma as part of a theatrical family that performed traveling shows. She studied in Chicago briefly and went to New York, where she met her first husband, actor Robert Walker. In Hollywood in the 1940s, Selznick “discovered” her, changed her name from Phylis Isley to Jennifer Jones and molded her career. Her first vehicle, The Song of Bernadette (1943, with Jones as Bernadette of Lourdes), earned her an Oscar as best actress. She went on to be nominated four more times, for Since You Went Away (1944), Love Letters (1945), Duel in the Sun (1946, with Gregory Peck) and Love is a Many Splendored Thing (1955, with William Holden). Off-screen she had an affair with Selznick and the two ended up divorcing their spouses and marrying in 1949. Her career waned after the mid-1950s, and in 1965 Selznick died. She went on to marry a third time in 1971, to millionaire art collector Norton Simon. Although her last film was 1974’s The Towering Inferno (with Paul Newman and Steve McQueen), she remained active as an advocate for the mentally ill and as a director of the Norton Simon Museum, a Pasadena institution devoted especially to modern art.

Something in Common with Jennifer Jones