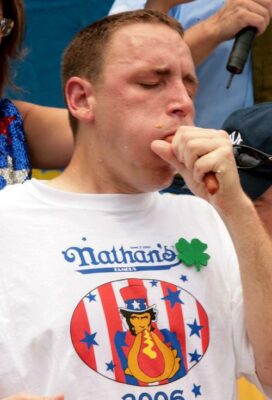 His profile from the eatin' organization

All the latest from the king of ingesting hot dogs

NBC News reports on his 2017 victory

Big collection of recent stories about (or mentioning) Chestnut

Joey Chestnut is a 10-time winner of the annual July 4th Nathan’s Famous hot dog eating contest at Coney Island. He ate 66 hot dogs in 12 minutes to score his first win in 2007 (dethroning the six-time champ Takeru Kobayashi) and then won the next seven competitions in a row.

Joey Chestnut first made his name in competitive eating when he ate 59 and 1/2 hot dogs on 2 June 2007 at a contest in Tempe, Arizona, shattering the previous world record of 53 and 1/2 dogs held by Kobayashi. Chestnut began eating competitively in 2005 while a student at San Jose State University; his stomach capacity and his fame rose in tandem until his 2007 breakthrough.

His eight-year run as champ finally ended in 2015, when he ate 60 dogs but was defeated by the 62 hot dogs of challenger Matt Stonie. But Chestnut roared back in 2016, eating a record 70 hot dogs for the Coney Island win, and then won again in 2017 with another new record of 72 hot dogs.

Joey Chestnut proposed to his longtime girlfriennd, Neslie Ricasa, on the stage at Coney Island just before his 2014 win. She said yes, but the couple later broke up… The Nathan’s Famous hot dog competition was lowered from 12 minutes to 10 in 2008, leading to lower totals for dogs eaten… Takeru Kobayashi has not competed in the Nathan’s Famous contest since 2009, due to a contract dispute with the event; in 2010 he was arrested after trying to rush the stage after the competition, and in 2011 he appeared in a separate July 4th competition in New York City.