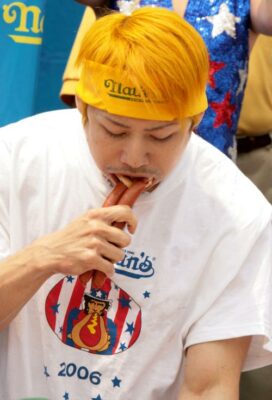 His official site, in Japanese and occasional English

2010 story about his arrest from the NY Daily News

From 2002: ESPN's wry report on Kobayashi and competitive eating

Takeru Kobayashi is the six-time winner of the Nathan’s Famous hot dog eating contest, held each 4th of July at Coney Island in New York. In 2001, his first year in the competition, Takeru Kobayashi ate 50 hot dogs in 12 minutes, shattering the record of 25 hot dogs set the previous year by his countryman Kazutoyo Arai. (Kobayashi, 5’7″ and 131 pounds, gained eight pounds in the 12 minutes of the competition.) Takeru Kobayashi won again in 2002 (50 and one-half dogs), in 2003 (44 and one-half dogs), in 2004 (a new record of 53 and one-half hot dogs), n 2005 (49 dogs) and in 2006 (another new record, of 53 and three-quarters dogs). His startling chow prowess made Kobayashi an international celebrity; in 2002 he won a made-for-TV eating competition called Glutton Bowl #1, and in 2003 lost a hot dog-eating contest to a Kodiak bear on the show Man vs. Beast. In 2006 he became a world champion at eating bratwurst, downing 58 sausages in 10 minutes. However, Takeru Kobayashi’s world record for hot dogs was broken in 2007 by Joey Chestnut, who ate 59 and 1/2 hot dogs at a contest in Tempe, Arizona. Chestnut and Kobayashi then went gut-to-gut at the 2007 4th of July contest: Kobayashi ate a personal record 63 hot dogs in 12 minutes, but Chestnut topped him with 66 dogs. The next year Chestnut beat Kobayashi again, winning a five-dog tiebreaker after the two tied with 59 dogs in the regular competition. Chestnut won again in 2009, eating 68 hot dogs to Kobayashi’s 64. Kobayashi did not participate in the 2010 and 2011 contests due to a contract dispute with Major League Eating, one of the governing bodies of the event; in 2010 he was arrested after he tried to climb onstage after Chestnut’s win. (Charges were later dropped.) In 2011 he ate 69 hot dogs in 10 minutes on July 4th at a separate, non-Nathan’s event, thereby claiming an unofficial world record.

Takeru Kobayashi was a pioneer of what has been called the “Solomon method” — breaking each hot dog in two, then stuffing both halves in his mouth… One of Kobayashi’s opponents at the 2003 Nathan’s competition was former NFL star William “The Refrigerator” Perry, who dropped out after eating a mere four hot dogs.