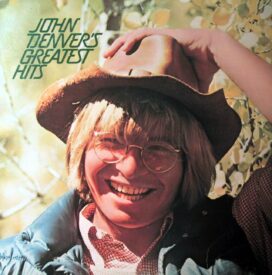 John Denver was popular in the 1970s as the writer and singer of upbeat folk/pop tunes like "Rocky Mountain High," "Take Me Home, Country Roads" and "Thank God I’m A Country Boy." Denver was a superstar with an acoustic guitar, blonde hair and a clean-cut image; he also produced the hit singles "Sunshine On My Shoulders," "Back Home Again" and "Calypso" (a tribute to undersea explorer Jacques Cousteau). 15 of Denver’s albums made it into the Top 40 charts between 1971 and 1982. He also acted a little, most notably in the film Oh, God! (1977, with George Burns) and in a series of TV Christmas specials, both by himself and with Jim Henson‘s Muppets. Denver died in 1997 when a small plane he was piloting crashed into Monterey Bay on the California coast.

Denver wrote the tune “Leavin’ On a Jet Plane” that was a #1 hit for Peter, Paul and Mary in 1969… There is no truth to the rumor that John Denver was an Army sniper in the Vietnam War. A similar false claim has often been made about other notable nice guys, including TV host Mister Rogers… John Denver is no relation to Gilligan’s Island actor Bob Denver.

Something in Common with John Denver