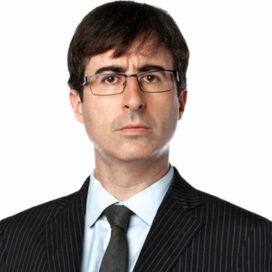 John Oliver was born in Birmingham and attended Cambridge University, where he performed with the school’s Cambridge Footlights comedy group — the same troupe that produced Monty Python’s Eric Idle and John Cleese, among many other future stars of comedy and entertainment. After graduation in 1998, Oliver performed stand-up and eventually created the radio show Political Animal; in 2005 he became a regular on the the BBC TV program Mock the Week.

Oliver joined the U.S. comedy program The Daily Show in 2006 as its “senior British correspondent.” Oliver’s slightly manic dimpled grin and blithely sarcastic commentary were a hit with American fans; The Boston Globe described his onscreen persona as “a kind of awkward intellectual dope from across the pond” who is “a bit baffled by America and its strange ways.”

In 2013 he filled in for Jon Stewart as The Daily Show’s host for a few summer months; he was so successful that HBO offered him his own show. Last Week Tonight with John Oliver premiered on 27 April 2014. The satirical news show won a Peabody Award for excellence in 2014 and has won multiple Emmy Awards: for outstanding interactive program (2015), outstanding variety talk series (2016) and outstanding writing for a variety series (2016).

John Oliver has also had a recurring role on the sitcom Community (as Professor Ian Duncan, beginning in 2009) and had small roles in the movies The Love Guru (2008, with Mike Myers) and The Smurfs and The Smurfs 2 (2011 and 2013, respectively, voice only).

John Oliver married Kate Norley in 2011. Norley joined the U.S. Army as a medical specialist after the 9/11 attacks of 2001, and served a combat tour of duty as a medic in Iraq from 2003-05. They met at the 2008 Republican National Convention; Oliver was covering it for The Daily Show, Norley was campaigning for the group Vets for Freedom. Their first child, a son, was born in November of 2015, according to The Hollywood Reporter… With his longtime friend (and Oxford graduate) Andy Zaltzman, John Oliver created the popular weekly satirical podcast The Bugle in 2007.

Something in Common with John Oliver