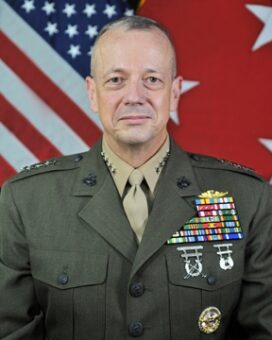 Official bio from the Department of Defense

A teaching guide written by Allen, for soldiers

John R. Allen succeeded General David Petraeus in July of 2011 as the top U.S. and NATO commander in Afghanistan.

A four-star general, John Allen was slated to become NATO Supreme Allied Commander for Europe when his nomination was put on hold in November of 2012 because of his peripheral role in a sex scandal involving General Petraeus and Paula Broadwell.   Allen was linked to the scandal through his email exchanges with Jill Kelley, a Florida socialite with friendly ties to both Allen and Petraeus, and the woman said to set the whole thing off by telling an FBI friend about harassing emails from Broadwell.

During the FBI investigation into Broadwell’s emails, messages between General Allen and Jill Kelley were discovered, described in initial reports as being between 20,000 and 30,000 pages of “potentially inappropriate” messages, sent between 2010 and 2012. Within a day, that had changed into possibly a few hundred “flirtatious” messages, leaving everyone to speculate. General Allen told his bosses he’d done nothing wrong, and the White House supported him, even while putting his promotion on hold.

Prior to the scandal, Allen’s career had been a steady upward progression. A graduate of the U.S. Naval Academy in 1976, Allen spent most of his early career in Washington, D.C., getting graduate degrees and becoming an expert in Marine training and operational analysis. During the 1990s he had field command during humanitarian and peace-keeping missions in Cuba and the Balkans, and in the 2000s he served as a director of Pacific and Asian affairs for the office of the Secretary of Defense, before heading to a command position in Iraq during Operation Iraqi Freedom.

After his successes in Iraq, John Allen became Deputy Commander of U.S. Central Command in 2008, headquartered in Tampa, Florida. When General Petraeus became C.I.A. director in 2011, Allen replaced him as commander in Afghanistan. Allen was cleared of any wrongdoing when it came to the Petraeus scandal, and in 2013 Allen retired rather than pursue the job of NATO commander.

Gen. John Allen spoke in support of nominee Hillary Clinton at the Democratic National Convention of 2016.

Something in Common with John R. Allen