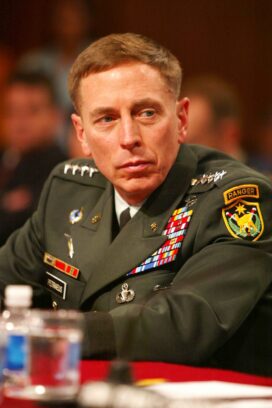 General David Howell Petraeus led the American military “surge” in Iraq (2007-08) and commanded international forces in Afghanistan (2010-11) before resigning as CIA director under cloud of scandal in 2012. David Petraeus grew up in Cornwall-on-Hudson, New York and graduated from the U.S. Military Academy at West Point in 1974. After graduating from the U.S. Army Command and General Staff College (1983), he earned advanced degrees in public administration (1985) and international relations (1987) from Princeton’s Woodrow Wilson School of Public and International Affairs. David Petraeus led the 101st Airborne in the 2003 attack on Saddam Hussein‘s regime in Iraq. He was then charged with training the new Iraqi Army, a position he held from June of 2004 until September of 2005. Petraeus returned to a command position at Fort Leavenworth, Kansas, where he worked on new strategies for counterinsurgency training. Known as an upbeat reporter amid naysaying prognosticators, Petraeus publicly supported President George W. Bush‘s Iraq policy, drawing criticisms from the president’s political opponents. Petraeus became the commander of the Multi-National Force – Iraq (MFN-I) in February of 2007 and was charged with leading a “surge” of troops in a new strategy against anti-U.S. forces. He was succeeded in that post by General Ray Odierno in September of 2008 and made commander of the U.S. Central Command, overseeing operations in Central Asia and the Middle East. Petraeus was named in June of 2010 to replace General Stanley McChrystal as the commander of U.S. forces in Afghanistan and served in that post until August of 2011, when he took over as director of the CIA.

David Petraeus resigned as CIA director on November 9, 2012 after announcing that he had cheated on his wife: “After being married for over 37 years, I showed extremely poor judgment by engaging in an extramarital affair.” News reports said that the affair was with Paula Broadwell, a West Point graduate who wrote a 2012 biography of the general titled All In: The Education of General David Petraeus. (The affair was reportedly discovered after Broadwell sent threatening anonymous emails to Florida socialite Jill Kelley, whom she apparently considered a romantic rival.)  Petraeus’s resignation, and the salacious details around it, quickly blew up into the most-covered political scandal of 2012. Eventually, in 2015, Petraeus admitted that he shared classified material with Broadwell as she wrote her book, and agreed to plead guilty to one misdemeanor count of the unauthorized removal and retention of classified material.

David Petreaus was called “Peaches” when he was a kid, and the nickname has stuck with him among close friends…  His last name is pronounced pe-TRAY-us… The political advocacy group MoveOn.org accused David Petraeus of sugarcoating progress reports from Iraq in a controversial September 2007 advertising campaign that called him “General Betray Us.”

Something in Common with David H. Petraeus