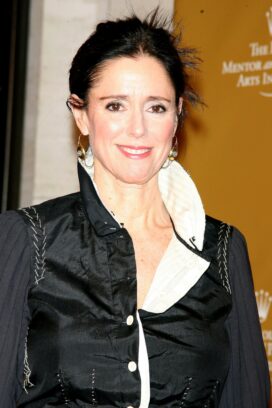 Julie Taymor is the innovative and media-mixing director who turned the animated film The Lion King into a live-action smash hit on Broadway. Julie Taymor grew up near Boston, spent a student year in Paris, and then graduated from Oberlin College in 1974. Fascinated by theater, she spent nearly five years in Indonesia and Asia, where she began mixing Western storytelling techniques with Asian-style rod puppets and masks. In the 1980s Julie Taymor made a name for herself in New York City as a costumer, maskmaker and set designer. She directed The Tempest at the Theater For a New Audience in 1986, and by 1995 she was directing films in America (her first was the 1992 film Fool’s Fire) and operas in Europe (including The Magic Flute in Florence). Taymor’s great triumph came in 1997, when she tackled a difficult puzzle — how to turn the Disney film The Lion King into a theatrical play — and solved it brilliantly by blending human actors, African-style masks, and oversized puppets. She won Tony Awards for both directing and costume design, and The Lion King was a huge success, running on Broadway for the next decade and more. Julie Taymor also directed the movies Frida (2002, with Salma Hayek as artist Frida Kahlo) and Across the Universe (2007, based on the music of The Beatles). Her reputation took a hit in 2010 with Spider-Man: Turn Off the Dark, a supersize Broadway musical based loosely on the Spider-Man comics; Julie Taymor wrote and directed the show, which suffered story trouble, alarming cast injuries and endless delays as the budget ballooned to over $65 million.

Julie Taymor’s directing Tony Award for The Lion King was the first ever given to a woman director… Much of her work since 1980 has been done with composer Elliot Goldenthal, who is also her longtime life partner… Julie Taymor was given a MacArthur Fellowship — more commonly known as a “genius grant” — in 1992… In January of 2011, The Lion King had its 5462nd Broadway performance, moving past Beauty and the Beast to become the 7th longest-running Broadway show of all time.

Something in Common with Julie Taymor