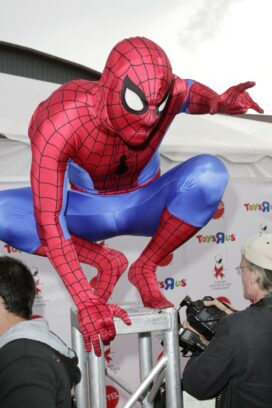 Spider-Man was created in 1962 by Marvel Comics legend Stan Lee, his creative partner Jack Kirby, and artist Steve Ditko. In the decades since, the masked superhero has become a popular star of cartoons, television, movies and even Broadway.

Spider-Man first arrived in the Marvel comic Amazing Fantasy #15 in 1962; his own series, The Amazing Spider-Man, began the next year. According to the origin story, Spider-Man is the alter ego of student Peter Parker; an accidental bite from a radioactive spider gave Parker the arachnid’s relative strength and agility plus a tingling “spider sense” for danger. After his Uncle Ben is killed by a burglar, Parker determines to use his new powers to fight crime, dressed in a mask and form-fitting costume and equipped with spider-like web slingers.

Ongoing characters in the Spider-Man universe include his love interest Mary Jane Watson (and at times another girlfriend, Gwen Stacy), kindly worrywart Aunt May, hotheaded Daily Bugle publisher J. Jonah Jameson and exotic villains like Doctor Octopus and the Green Goblin. Spider-Man became a daily comic strip in 1977, and has been featured in a variety of animated TV series.

The Broadway musical, Spider-Man, Turn Off the Dark, featured music by Bono and The Edge of the band U2. Though the special effects-laden show had many pre-production struggles, including multiple injuries to cast members, it ran for 182 previews and then 1066 performances from 2010-2014.

In some of the ongoing versions of the storyline, Spider-Man has married Mary Jane and they are separated or Mary Jane is presumed dead… In some versions, the spider which bit Peter Parker is genetically altered rather than radioactive… The character Spider-Girl is a futuristic spinoff of the Spider-Man story, with Peter Parker’s teenage daughter taking on his crimefighting ways. In still other versions, Gwen Stacy is not Peter Parker’s girlfriend but is herself bitten by a spider and becomes Spider-Woman.