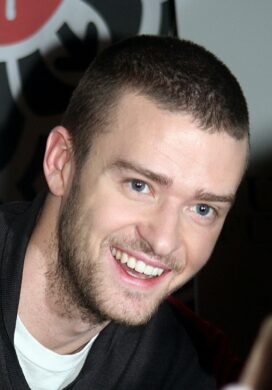 Justin Timberlake made the leap from boy band member to Sinatra-style alpha male at the start of the 2000s.

His charisma and good looks made him a special favorite with female fans. (His popularity was helped by his on-again, off-again romance with pop songstress Britney Spears.)

Justin Timberlake went solo with the 2002 album Justified, which established him as a hunky urban leading man. Justified won Grammy Awards for best pop vocal album and best male pop vocal performance for the single “Cry Me A River.”

His second album, FutureSex/LoveSounds, came out in 2006 and had a stronger R&B tilt; it included the hit single “SexyBack” and established him as a fashion plate as well as a singer.

Meanwhile he remained a tabloid favorite thanks to his romances with actresses Cameron Diaz (2003-06) and Jessica Biel (starting in 2007; they were married on October 22, 2012).

Timberlake launched his own label, Tennman Records, in 2008 and continued a steady stream of concert performances, TV appearances, and album guest shots. His other films include The Social Network (2010, as high-tech rebel Sean Parker), Bad Teacher (2011, with Diaz) and Friends With Benefits (2011, with Mila Kunis).

Justin Timberlake and Jessica Biel had their first child, a son named Silas Randall Timberlake, in April of 2015… Justin Timberlake and fellow *NSYNC member J.C. Chasez were regular cast members (along with Britney Spears and Christina Aguilera) on the 1990s TV revival of The Mickey Mouse Club… Timberlake found himself at the center of a public rhubarb in 2004, after he ripped off a portion of fellow singer Janet Jackson‘s costume, exposing her breast, during a halftime performance at the Super Bowl. He later apologized for the incident, attributing it to a “wardrobe malfunction”… He had a role as a wife-stealing French-Canadian hockey goaltender in the infamous 2008 film flop The Love Guru…  Justin Timberlake went to the Instructor Battalion Marine Corps Ball in Richmond, Virginia on 13 November 2011; he was the date of Corporal Kelsey De Santis, a combat instructor who has posted a YouTube video inviting (or challenging) him to attend with her.

Something in Common with Justin Timberlake