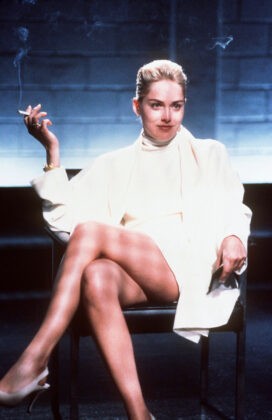 A cool blonde who combined brainy sex appeal and old-fashioned Hollywood glamour, Sharon Stone was one of Hollywood’s biggest stars in the 1990s. Stone was a Ford Agency model in the late 1970s and then turned to acting, beginning with B-list movies like King Solomon’s Mines (1985, with Richard Chamberlain) and Police Academy 4 (1987). Her brazen role as a sultry killer in the 1992 film Basic Instinct made her a star. (The movie’s interrogation scene, with Stone uncrossing and crossing her legs seductively in front of co-star Michael Douglas, became an iconic Hollywood moment.) Her newfound star power put her in position to produce and star in the western The Quick and the Dead (1995, directed by Sam Raimi and also starring Leonardo DiCaprio), and for her role in Martin Scorsese‘s crime film Casino (1995, co-starring Robert DeNiro) she was nominated for an Oscar. Since then her starring roles have been few and far between while she spends time raising two children. Sharon Stone’s other films include Sphere (1998, with Dustin Hoffman), the remake Gloria (1999, with Stone in the Gena Rowlands role) and Broken Flowers (2005, with Bill Murray). She reprised her role as the seductive Catherine Tramell in the 2006 sequel Basic Instinct 2, and had smaller roles in Bobby (2006, with Demi Moore and Alpha Dog (2006, with Justin Timberlake.

Sharon Stone married San Francisco Chronicle editor Phil Bronstein in 1998; the couple split in 2003 and were officially divorced in 2004…
Stone and Bronstein adopted a son, Roan, in 2000. She adopted a second son in 2005, whom she named Laird Vonne Stone… Sharon Stone was married to Michael Greenburg from 1984-87… Sharon Stone and Phil Bronstein were in the news in June of 2001 after a bizarre incident in which his left foot was bitten severely by a Komodo Dragon during a private tour of the Los Angeles Zoo.

Something in Common with Sharon Stone