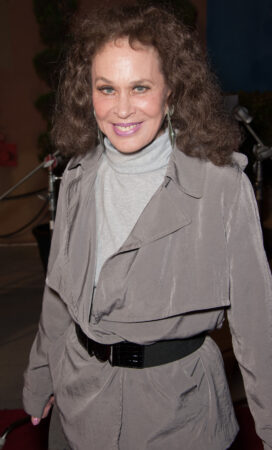 Karen Black was best known for her film work in the 1970s, including her Oscar-nominated performance as Rayette, the ditzy waitress in Five Easy Pieces (1970). Black grew up in Illinois and moved to New York as a teenager to break into show business. After a series of odd jobs and off-Broadway plays, she got rave reviews for her Broadway performance in 1965’s The Playroom. The play closed after a month, but that was enough time for Black to draw the attention of Francis Ford Coppola, who put her in his first film, 1967’s You’re a Big Boy Now. Even though that movie didn’t get much attention, it introduced Karen Black to guys like Henry Jaglom and Dennis Hopper, renegade filmmakers whose outsider stance was just the thing for Hollywood appetites of the late 1960s. Black, a brunette with voluptuous lips and a slightly cross-eyed stare, was an unusual lead who could play sexy and crazy with equal facility. She had a small part in Easy Rider (1969), but that led to a bigger part in Five Easy Pieces, playing the guileless girlfriend opposite Jack Nicholson‘s angry intellectual. Her Oscar nomination as a supporting player didn’t make her a Hollywood star, but Black continued with offbeat roles in a number of movies, including The Great Gatsby (1974, starring Robert Redford), Airport 1975 (1974), Nashville (1975, directed by Robert Altman), Family Plot (1976, Alfred Hitchcock‘s last film) and Come Back to the Five and Dime, Jimmy Dean, Jimmy Dean (1982, starring Cher).

Karen Black also starred in a memorable 1975 TV movie called Trilogy of Terror, one segment of which had her being terrorized by a “Zuni fetish doll.”

Something in Common with Karen Black