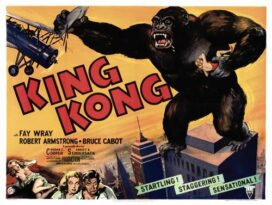 King Kong: The Eighth Wonder of the World

Terrific detail, with an excellent FAQ on the 1933 film and great links to other Kong sites

News, rumors and links about the big ape's latest remake

A terrifying 50-foot-tall ape, King Kong is one of the most famous monsters in movie history. He first starred in the 1933 film King Kong; the movie’s climax, with Kong carrying actress Fay Wray to the top of the Empire State Building, is a famous Hollywood moment. (Kong was created for that film by special effects pioneer Willis O’Brien.) King Kong later starred in several remakes and in the 1963 Japanese classic King Kong vs. Godzilla. Kong returned in late 2005 in a brand-new film directed by Oscar-winner Peter Jackson and starring Naomi Watts in the Fay Wray role.

Something in Common with King Kong