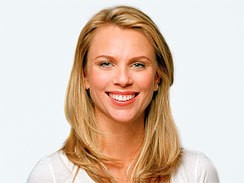 Lara Logan’s reports from Afghanistan, Iraq and other global hot spots earned her a job reporting for CBS News in 2002. Only 31 at the time, Lara Logan had already spent more than a dozen years in the news business, beginning with jobs writing for The Daily News and The Sunday Tribune of Durban, South Africa while attending the University of Natal. After graduating in 1992 she worked in a wide variety of journalism jobs: as a producer for Reuters Television, a freelance correspondent for CNN, and as a correspondent for the British morning news program GMTV, where she began to be known for her international reporting. Upon joining CBS in 2002 she became a correspondent for the network’s radio news and the magazine program 60 Minutes II as well as for The CBS Evening News. Logan’s good looks are part of her story: she modelled swimsuits for local advertisements while in college, was a favorite of British tabloids while with GMTV, and was called a “War Zone ‘It Girl'” in a 2005 New York Times profile. CBS named her its chief foreign affairs correspondent in 2008. Logan announced in 2008 that she was pregnant by Joseph Burkett, a federal contractor she worked with in Iraq who was married at the time. She and Burkett had a son in 2009. She was in the news again in February 2011, after CBS News announced that Logan had been hospitalized after being assaulted by crowds in Cairo while covering the Egyptian rebellion.

Lara Logan married pro basketball player Jason Siemon in 1999; Siemon was born in Iowa but played professionally in Europe. The couple divorced in 2005 and Logan married Burkett in 2008… Logan was mentioned as a possible successor to Dan Rather as anchor of The CBS Evening News, a job later won by Katie Couric.

Something in Common with Lara Logan