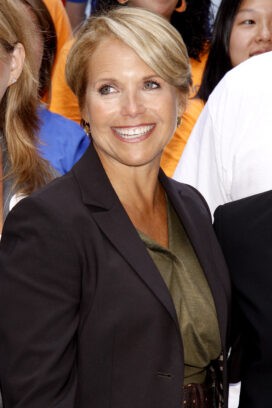 Katie Couric: A Look Back

Her own channel, with various homemade videos

Humor is the New Gravitas

Katie Couric is the TV host and journalist who anchored The CBS Evening News from 2006-11. She previously was the host of the NBC morning program The Today Show from 1991 through 2006. Katie Couric worked for CNN and ABC early in her career, also reporting in Miami and Washington, D.C. She joined NBC News in 1989 and the Today show in 1990, becoming permanent co-anchor in 1991. With her perky attitude and no-holds-barred interviewing style, Katie Couric boosted the show’s sagging ratings and became one of morning TV’s most popular personalities. Her husband, Jay Monahan, died in 1998 of colon cancer, and in 1999 Couric co-founded a non-profit organization for cancer research and education. In 2001, Katie Couric signed a new contract (worth a reported $65 million) to remain with The Today Show through 2006. When that contract ended, she announced to Today Show viewers on 5 April 2006 that she would leave the show at the end of May to become the anchor of The CBS Evening News. Couric made her debut on the evening news broadcast on 5 September 2006. After five up-and-down years, she announced in April of 2011 that she had decided to step down from the job. Her last show as anchor was 19 May 2011, and CBS News announced that she would be succeeded by Scott Pelley.

Katie Couric was only the third permanent anchor of the CBS Evening News in 44 years: Walter Cronkite held the post from 1962-81, and Dan Rather from 1981-2005… Katie Couric’s replacement on Today was veteran broadcaster Meredith Vieira.

Something in Common with Katie Couric