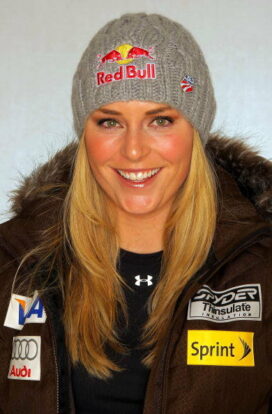 Lindsey Vonn was the most successful American ski racer of the 21st century until her retirement in 2019.

Lindsey Vonn grew up in Apple Valley, Minnesota and began skiing at age 2; when she was 11 she moved to Colorado with her family to train at Ski Club Vail. At age 17 she qualified for the 2002 Olympics in Salt Lake City, finishing a promising sixth in the combined event.

Lindsay Vonn had less luck in the Olympics: she was injured in practice just before the Turin Olympics of 2006 and didn’t win a medal, and in 2010 she suffered a pre-Olympic shin injury. But that year she recovered to win a gold medal in the women’s downhill and a bronze in the Super-G. After missing the Sochi Olympics entirely in 2014 due to injury, she bounced back to win a bronze medal in the downhill at the 2018 Olympics in PyeongChang, South Korea.

Lindsay Vonn announced her pending retirement in an Instagram post on February 1, 2019, saying “My body is broken beyond repair and it isn’t letting me have the final season I dreamed of.” She finished her career with a bronze medal in downhill at the World Championships two weeks later. Vonn’s career totals included 82 World Cup wins, three Olympic medals and seven world championship medals. Her 82 World Cup wins were the most ever for a woman, and just four behind the all-time record of 86 wins held by Sweden’s Ingemar Stenmark.

Lindsey Vonn married Thomas Vonn, a former ski racer, in 2007; they were divorced in 2013… Lindsey Vonn dated golf superstar Tiger Woods from 2012 until 2015, when they announced their split on social media… Lindsey Vonn’s fame has been helped along by her good looks; she posed for the Sports Illustrated swimsuit issue in 2010 and again in 2016.

Something in Common with Lindsey Vonn